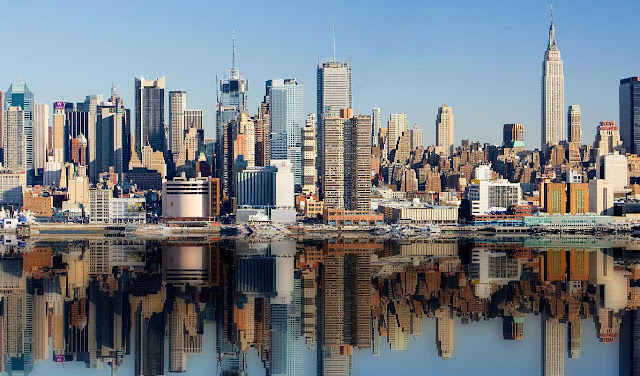 A human settlement got settled following Henry Hudson’s exploration in 1609 as a colony of the Netherlands, a fort named as ‘Orange’ was established in 1624 by the Dutch at modern Albany as the first permanent settlement, the following year New Amsterdam got its birth after Peter Miniut, the then Dutch Governor legalised the settlement by paying 60 Dutch guilders to the Indians. The Dutch West India Company started issuing land patents to the residents i.e. a person can now hold title of the land, which was something not possible in Europe at that particular time attracting migrations towards an untouched land for writing their life history. When an English fleet sailed into New Amsterdam in 1664, Peter Stuyvesant, the Governor surrendered without a fight and the settlement got its new name under the legacy of the Duke of York as ‘New York’. The population of the city in 1698 was about 18,000 which grew upto around 1,63,000 by the eve of the American Revolution.

The city of New York consisted of many neighbourhoods distributed amongst the city’s five boroughs - Manhattan, Brooklyn, the Bronx, Queens and the Staten Island each of whom had a different lifestyle one of whose main reasons was the issuance of land permits started by the Dutch and followed by the Britishers as part of their policy which resulted into a human society with one of the most cosmopolitan culture of all times. After being only the third largest port of America at the time of the American Revolution, New York experienced a major rise and soon by mid 1800’s it began handling more than half of the country’s international trade while ocean being the medium. It became the world’s busiest port in the twentieth century which it held by for decades after.

Simultaneously, the haphazard pattern of streets raised the need for a commissioner of streets in 1798 which earmarked the beginning of urban planning as an official exercise. The site’s geographical age dates to about 100 million years back as found through the sections of the granite bedrock which allowed and suited for designing modern skyscrapers with firm base. The administrative structure of New York was shaped by the consolidation of the city and its neighbourhood in 1898. During the same time, the population of the city got doubled from being around 1,500,000 in 1890 to 3,000,000 in 1900 and city started facing huge gaps in human transit system. The first segment of the subway system was opened in 1904 which started handling more than two billion passengers per year by 1940’s. The subway system helped in changing the urban structure of the city and its progress. It also gave rise to the modern culture of work system over many parts around the Globe with human beings travelling from one corner of urban sprawl to another daily in many senses which are often more than an hour of a single way trip.

With the rising human mobility and energy consumption, air and water pollution began declining the air and water quality especially after 1960’s the city started facing congestion both of the highways and the public mass transit system. Housing shortage started boosting up. Like every other city faces some kind of crisis at some point of their life, New York too had faced some financial crisis one of such scenario took place in 1975 when the city’s authority lacked enough money to pay all its bills for the year and it was taken care by the interference of the state authority and Municipal Assistance Corporation came into existence which ended some money to help city in paying its debt. The population of the city increased from being 7,000,000 around in 1930 to about 8,500,000 in 2014. It can be said that the city’s population saw stagnation (majorly due to the city now being in the mature stage) but most of the bigger cities of the United States have lesser population now than they had around 50 years ago.

Poverty has been one of the major issues for the city traditionally of whose levels have seen many ups and downs historically. The poverty rate rose to 21.2 percent in 2012 from being 20.9 the previous year which is a healthy population of around 1.7 million human beings. The city budgets more than $4 billion a year on welfare programs to provide food, clothing, housing, medical care, and other benefits. The city has been one of the largest employment producer for the entire country but the authority has struggled to get rid of this menace. The other issue is that of carbon emissions for which the city’s authority can be seen thinking positively in the direction and a roadmap was prepared in 2014 to cut the emissions by 80 % than it was in 2005. An initiative under the title ‘PlaNYC’ was initialised in 2007  which started from dealing emissions by 30 per cent by 2025. The city is primarily focusing on the efficiency of the buildings which contributes more than 60 per cent for the aggregate carbon produced by the city. New York City gives a good picture by accounting only 1 per cent of United States greenhouse gas emissions while housing 2.7 per cent of its population. Water consumption per capita has also decreased from being 208 gallons per day per capita to around 125 gallons per day per capita in 2009 which are good signs of rising awareness and preserving water for worse. The city due to its strategic geographic position also faces the risk for frequent heavy storms. The city has also been warned for the economic and human cost of land submergence as has been the case of the other coastal cities around the planet. The city shall think more towards long lasting measures to make itself more disaster friendly and alternative solutions are also needed to be taken. The city was also ranked amongst one of the dirtiest cities of the United States and in the world's first metropolitan  modern city, it seems issues and problems have never left the hand of the city besides some significant changes over the last couple of decades.

In a city where modern urban life got its existence much before than in nearly any other modern city, New York has seen nearly all kinds of times like a grand old man generally considered as to have seen all aspects of human life. The example of the creation and visualisation strength of the human beings provides an exemplary scenario for the cities which are in their young age and are needed to be examined from multiple angles based on the context of theirs. The role of the authority is also one key thing which New York as a city provides in the catalogue which have tried to engage the society for making it efficient and sustainable especially after 1980’s. The city has experimented and seem to be finding its age-like behaviour i.e. more responsible now by looking the urban frame from multiple windows which other cities should quickly grasp and apply efficient, sustainable and long-lasting measures for the rising issues across the megacities of the world. The city has to keep up the pace with other fast developing cities in the matter of competitiveness and in order to increase the longevity of the city - for it one step should be towards engaging and inspiring the community in order to hold on and revive its presence in the very dynamic process of urbanisation especially in this highly increasing virtually globalised world.